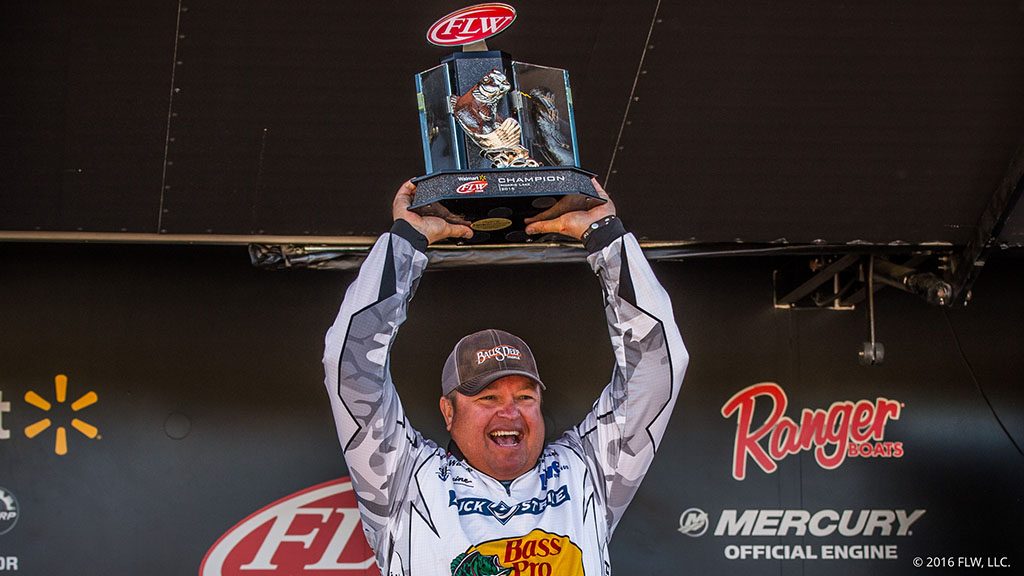 RICHMOND, Calif., Oct. 24, 2016 – After joining the River2Sea pro team last month, James Watson of Nixa, Mo., quickly put the brand’s baits to work, earning his first FLW Tour victory on Norris Lake in Clinton, Tenn. with two of his favorite River2Sea topwater lures on the end of his line.

The FLW Tour win marks the third major championship title that Watson has collected in his career. Notably, this win comes in the fall as did both of his previous victories – PAA (Table Rock, Sept 2013) and B.A.S.S Central Open (Table Rock, October 2015).

Watson relied on a topwater pattern, throwing the River2Sea Whopper Plopper and Bubble Walker for the majority of his tournament-winning total of 36-10.

“Norris is well-known for the Spook bite,” said Watson. “I wanted to give the fish a loud, splashy version of that and that is what the Bubble Walker is. If you’re on a strong walking, topwater lake, like I was, the Bubble Walker needs to be added to your arsenal. I know that I am glad that I added it to mine. I caught two of my fish on the 128 size in Powder.”

Eight of Watson’s bass were credited to the Plopper. He threw it in Loon and Perch color patterns.

“The lake’s conditions dictated the Whopper Plopper, as they have for me for the last few years,” he said. “The bass in Norris acted like they had never seen it before.”

Watson cashed in on event winnings that surpassed $95,000 and guaranteed the FLW Tour pro a berth to the 2017 Forrest Wood Cup.

“We are very excited to be a part of James’ success,” said Angelo Alorro River2Sea National Sales Manager. “We started calling him Mr. October, since it is his second October in a row with a major tournament win.”

“I love the fact that I’ve already punched my ticket for next year’s Forrest Wood Cup and I couldn’t have done it without these fine River2Sea products,” added Watson. “It doesn’t matter if you’re a novice angler or a tournament bass fishermen, if you don’t own these two baits in multiple colors, you are shortchanging yourself. They just catch more fish – period.”

River2Sea USA manufactures products for both fresh and saltwater application. The product line features the highest quality materials and workmanship available. From the surface to the bottom, and in the tackle stores they make lures that produce results; from River2Sea. For more on River2Sea, visit River2Sea.com.